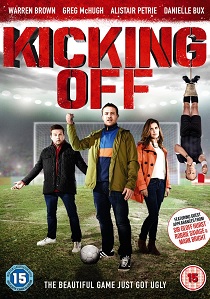 The Beautiful Game is about to get a whole lot uglier in the hilarious Kicking Off, released on DVD from 25th April 2016, courtesy of Precision Pictures.

Despite a nightmare of a season so far, loyal fans Wigsy (Warren Brown - TV's Luther, Inside Man) and Cliff (Greg McHugh - TV's Fresh Meat, Gary Tank Commander) join the thousands of adoring supporters each Saturday in the terraces to sing and cheer their boys to victory.

But today is different. Today is important. Win: they stay up. Lose: they go down. In the dying moments of the match, unbelievable elation as their team score is immediately followed by unbelievable deflation as the Ref (Alistair Petrie - TV's The Night Manager, Utopia) disallows the goal. This, compounded by a goal at the other end, sends the losing supporters into a frenzy; and determined to right this injustice, Wigsy, with a more reluctant Cliff in tow, decides to do the only decent thing...and kidnap the referee.

Also starring Danielle Bux (TV's Aquarius, Silent Witness) and with cameo appearances from Sir Geoff Hurst, Robbie Savage and Mark Bright, Kicking Off is one of the essential British comedies of the year. It wowed audiences at the 2015 Raindance Film Festival where it was awarded Best British Feature and, with the Euro Championships just around the corner, what better way to celebrate than by Kicking Off?

BD
After moving to a new town, two brothers discover that the area is a haven for vampires as the classic The Lost Boys is released on 4K UHD 20th September 2022 from Warner Home Video. END_OF_DOCUMENT_TOKEN_TO_BE_REPLACED
Top PicksView