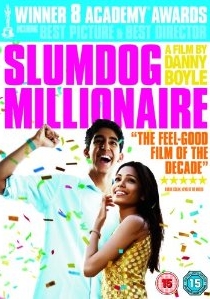 Starring Dev Patel and Freida Pinto, the breathtaking and exhilarating Slumdog Millionaire is released to buy and rent on DVD and Blu-ray on 1st June 2009 from Pathé Distribution Ltd.

Jamal Malik (Patel, Skins), is an 18 year-old orphan from the slums of Mumbai who finds himself just one question away from winning a life-changing 20 million rupees on India's Who Wants To Be A Millionaire. It is the moment of truth in the TV studio, with a hushed studio audience as Jamal prepares to deliver the answer to the final question. As the show runs out of time and breaks for the night, bitter Millionaire host Prem Kumar (Bollywood star Anil Kapoor) has the police waiting to seize Jamal, refusing to believe that a kid from the slums could know all the answers.

Interrogating Jamal throughout the night, the Police Inspector finds the boy is as confused as anyone by how far he has come in the contest. As they revisit the questions one by one, Jamal explains how he came to know each answer. As he does so, the extraordinary story of his life begins to emerge.

Inside Mumbai's network of slums, Jamal and his brother Salim have learnt to survive day-to-day after the tragic death of their mother. As they befriend a third musketeer, orphan girl Latika (Pinto), the trio's journey takes them on an adventure which changes the course and fortunes of all their lives. An unforgettable one-in-a-million film, Slumdog Millionaire has captured the world's attention and imagination.

Danny Boyle's visual spectacular is set to a dramatic score from Bollywood musical legend A. R. Rahman, which won the Golden Globe® and BAFTA® Award for Best Original Score, as well as a separate Best Song Oscars®. Simon Beaufoy (The Full Monty) collected the Oscar® for Best Adapted Screenplay after capturing the hearts of audiences worldwide with the bright, bold and beautiful story adapted from Vikas Swarup's novel Q&A.

Both the DVD and Blu-ray are packed with more than three hours of special features, including commentaries, featurettes and deleted scenes, taking you deeper into Danny Boyle's kaleidoscope creation and making it 2009's 'must-own' masterpiece.