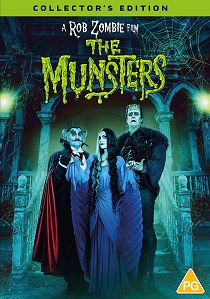 Mediumrare Entertainment announces the horror comedy The Munsters is being released on Collector's Edition DVD and Blu-ray on 9th January 2023, complete with must-see extra features.

From writer/director Rob Zombie (The Devil's Rejects) comes the strangest love story ever told! Based on the beloved TV series from the 1960s about a family of friendly monsters trying to fit in, Zombie's version features Sheri Moon Zombie (Halloween) and Jeff Daniel Phillips (Westworld) as Lily and Herman Munster, and Daniel Roebuck (Final Destination) as The Count. The cast also includes Doctor Who himself, Sylvester McCoy, as Igor, Lost star Jorge Garcia, and genre superstar Cassandra Peterson, better known as Elvira, Mistress of the Dark.

Filmed in bright day-glo colours, brimming with hilarious jokes and monstrously funny slapstick, not to mention all the werewolves, vampires and witches you can handle, this is a delightfully gothic delight that ghouls and gals of all ages will love. With nods to vintage horror classics along the way, and a beautiful tribute to the original series, you'll laugh, you'll cry, you'll howl at the moon as The Munsters make their way to Mockingbird Lane!

Lily is just your typical 150-year-old, lovelorn vampire looking for the man of her nightmares... that is until she lays eyes on Herman, a seven-foot-tall, green experiment with a heart of gold. It's love at first shock as these two ghouls fall fangs over feet in this crazy Transylvanian romance. Unfortunately, it's not all smooth sailing in the cemetery as Lily's father The Count has other plans for his beloved daughter's future, and they don't involve her bumbling beau Herman.

UHD
When an alien spacecraft of enormous power is spotted approaching Earth, Admiral James T. Kirk resumes command of the USS Enterprise in order to intercept it, in the ... END_OF_DOCUMENT_TOKEN_TO_BE_REPLACED
Top PicksView