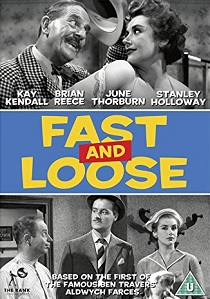 Fast And Loose, the charming 1950s farce superbly written by the legendary Ben Travers, is released on DVD 17th December 2018 from Strawberry Media.

A young married couple, Peter (Brian Reece) and Barbara (June Thorburn) are travelling by train to the countryside for a romantic weekend. Leaving Barbara on the train at the platform Peter pops out to buy a newspaper, but meets old flame Carol (Kay Kendall) at the news stand.

While Peter and Carol are chatting, the train leaves for the country without him. Peter, accompanied by Carol, frantically tries to catch up with his wife, hiring a car in order to drive to the hotel. Unfortunately for Peter the car breaks down and he ends up spending a night with Carol in a remote inn.

Barbara meanwhile has enlisted the help of her parents in order to track down her husband and the ensuing chase leads to a hilarious series of misadventures that you would anticipate from a Ben Travers script. Stanley Holloway is superbly cast as Barbara's downtrodden father.