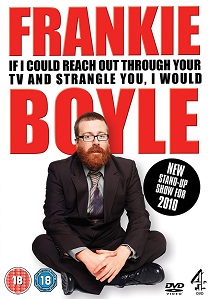 NewsStandup Comedy
News Article Go back to homepage
Candid Glaswegian Frankie Boyle has entertained over 200,000 people across the country in his hugely successful and critically acclaimed 2010 tour. Filmed at London's Hammersmith Apollo, If I Could Reach Out Through Your TV and Strangle You, I Would is released on 15th November 2010 from 4DVD.
Frankie Boyle
Brian Klein
Brian Klein
4DVD
Unknown
15/11/2010
Thank you for supporting DVD365.net when you order using the link(s) below. As an Amazon Associate we earn from qualifying purchases
Buy DVD
Information

Candid Glaswegian Frankie Boyle has soared to success with his fresh, straight talking, no-holds-barred stand-up comedy, entertaining over 200,000 people across the country in his hugely successful and critically acclaimed 2010 tour I Would Happily Punch Every One of You in the Face. Filmed at London's Hammersmith Apollo, this new DVD release captures the ultimate live stand-up performance from Frankie as he ends his stand-up career on an all-time high.

After knock-out DVD sales for his debut Frankie Boyle Live tour in 2008, and making the top 3 best selling live comedy DVDs in 2009, Frankie's brand new material is in colossal demand. Featuring 75 minutes of raw, uncut material plus never-before-seen DVD extras, If I Could Reach Out Through Your TV and Strangle You, I Would is not only a highly entertaining and hilarious show, but allows a glimpse behind the curtains of a comic on the road and an insight into the man himself, Frankie Boyle.

Armed with an impressive arsenal of punch lines which range from the distasteful to the downright offensive, this performance shows Boyle at his edgiest, as he proceeds to target Michael Jackson, social media, Obama and the economy...and an array of other subject matter too rude to print!

Since his crowd-pleasing, stand out appearance on BBC2's top-rated satirical comedy show Mock the Week, Frankie's career has gone from strength to strength, with his autobiography My Sh*t Life So Far proving a top seller for Christmas 2009. Frankie is having a sensational 2010 as he completes a UK tour of his brand new stand-up show and hits TV screens for the highly anticipated brand new sketch and stand-up show, Tramadol Nights, coming to Channel 4 this autumn.

Boyle started out on BBC's The Stand Up Show in 1995, before springing to fame in 1996 after winning the prestigious The Daily Telegraph Open Mic Award. His dry and cynical humour on BBC2's Mock the Week has won him a growing army of dedicated fans, which is reflected in the huge success of his 2010 UK tour.

BD
After more than thirty years of service as one of the Navy's top aviators, Pete 'Maverick' Mitchell is back where he belongs as Top Gun: Maverick flies onto DVD, Blu-ray and 4K UHD 31st October 2022 from Paramount Home ... END_OF_DOCUMENT_TOKEN_TO_BE_REPLACED
Top PicksView