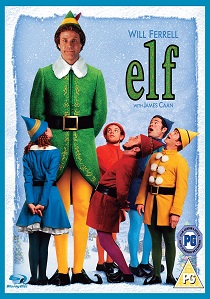 This Christmas, discover your inner elf! Grossing over £16 million at the UK box office when it was released theatrically, Entertainment In Video is delighted to announce the Blu-Ray release of Elf. Combining a heart, a brain, dazzling special effects and a wicked sense of humour, this is a true Christmas classic which can also be enjoyed all year round!

Directed by Jon Favreau and starring Will Ferrell (Semi-Pro, Blades of Glory, Anchorman), James Caan (Get Smart, Mickey Blue Eyes, The Godfather) and Mary Steenburgen (Step Brothers, I Am Sam, Parenthood) this Blu-Ray edition of Elf will be released to buy on 17th November 2008.

One Christmas Eve, a long time ago, a small baby at an orphanage crawled into a bag of toys belonging to Santa (Ed Asner) and was carried back to the North Pole. Taken under the wing of a surrogate father (Bob Newhart), Buddy (Will Ferrell) grows to three times the size of everyone around him. Realising that he will never truly fit into the elf world, he decides to head off to New York and track down his birth family.

But when Buddy meets his real father, Walter (James Caan), he is in for a shock. For Walter is not quite the genial parent he expected but a workaholic publisher of children's books with a place on Santa's 'naughty' list. Buddy also discovers a new stepmother (Mary Steenburgen) and a ten-year-old half-brother (Daniel Tay) who doesn't believe in Santa. In fact, it seems to Buddy that everyone has forgotten the true meaning of Christmas. Despite finding himself as much an outsider in the Big Apple as back in the North Pole, Buddy takes it upon himself to not only win over his family but to save Christmas for New York and the world.

3D-BD
The surviving members of the resistance face the First Order once again, and the legendary conflict between the Jedi and the Sith reaches its peak as Star Wars: The Rise of Skywalker is released on ... END_OF_DOCUMENT_TOKEN_TO_BE_REPLACED
Top PicksView