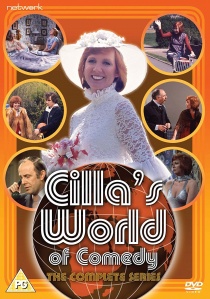 Marking a phenomenal 50 years in showbiz, one of Britain's most charismatic and best-loved celebrities Cilla Black dipped her toe into the world of acting in the 1970s with Cilla's Comedy Six and Cilla's World Of Comedy. The two series showcases the legendary Liverpudlian singer and comedienne's versatility on TV. Cilla's Comedy Six and Cilla'sWorld Of Comedy will be available to own on DVD for the first time from 7th October 2013, courtesy of Network Releasing.

Originally screened in 1975, Cilla's Comedy Six sees Cilla portrays a range of female roles from Mrs Average Housewife to round-the-world yachtswoman, woman caring for her widowed father and a temp fending off the amourous advances of her latest boss.

Cilla's World of Comedy sees Cilla in a set of bitter-sweet dramas focussing on the trials and tribulations of six modern women with very different lives, including a footballer's wife, a woman hoping to escape her past in a new home, a biology teacher who is forced to take stock of her own life and a bride-to-be making a torturous journey to the alter. Guest co-stars include Richard Wilson, Keith Barron, Frank Middlemass and James Hazeldine.

Related Articles
The Loved Ones, Only When I Laugh: The Complete Second Series, One Foot In The Grave: Series 4, The Proposition
Comments
3D-BD Releases News Pick

3D-BD
The surviving members of the resistance face the First Order once again, and the legendary conflict between the Jedi and the Sith reaches its peak as Star Wars: The Rise of Skywalker is released on ... END_OF_DOCUMENT_TOKEN_TO_BE_REPLACED
Top PicksView