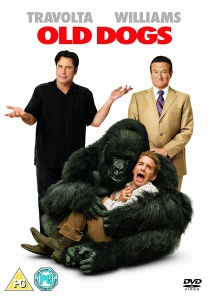 Academy Award winner Robin Williams, (Best Actor in a Supporting Role, Good Will Hunting, 1997) and John Travolta (Wild Hogs) star in Old Dogs the hilarious story of where two is not necessarily better than one. Releasing on DVD on 2nd August 2010 in the UK and 30th July 2010 in the Republic of Ireland, the feelgood comedy follows two best friends who suddenly find themselves caring for seven-year-old twins and discover that playing Dad is much harder than it looks. With bonus features including laugh-out-loud boopers, an exclusive music video and behind-the-scenes peeks Old Dogs is sure to make great family viewing.

Kelly Preston (Jerry McGuire), Conner Rayburn (The Invention of Lying), Seth Green (Can't Hardly Wait), Matt Dillon (There's Something About Mary) and, in her screen debut, Ella Bleu Travolta (real life daughter of Travolta and Preston) deliver champion comic performances in a movie that combines physical humour, off-the-wall escapades and heartfelt emotion. Synopsis Dan (Robin Williams) and his best friend and business partner Charlie (John Travolta) are on the verge of the biggest deal in the history of their sports marketing firm when their lives are turned upside down by a surprise visit from Dan's ex-wife Vicki (Kelly Preston).

Vicki has big news for Dan - their ever-so-brief liaison produced twins Zach (Conner Rayburn) and Emily (Ella Bleu Travolta), now seven-years-old and in need of a dad to keep an eye on them for two weeks. With only high-living playboy Charlie for support, Dan's bumbling attempts at "on the job training" in fatherhood result in a series of disastrously funny exploits that lead him to a new understanding of what really matters in life. The extraordinary cast of comedy purebreds including Seth Green, Matt Dillon and Lori Loughlin deliver laugh out loud moments in this family comedy.

UHD
Pixar Animation Studios serves up a breakthrough comedy with something for everyone as Ratatouille arrives for the first time on 4K Ultra HD 26th July 2021, exclusive to Zavvi. END_OF_DOCUMENT_TOKEN_TO_BE_REPLACED
Top PicksView