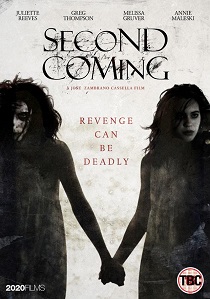 NewsHorror
News Article Go back to homepage
Revenge can be deadly. Prepare yourself for a journey of vengeance fuelled by the bond shared only by twins in the independent horror Second Coming, released on DVD on 15th August 2011 by 2020 Films.
Randy Molnar, Melissa Gruver, Marnee McClellan, Annie Maleski, Greg Thompson, Juliet Reeves London
Jose Zambrano Cassella
Ralph Harden, Melissa Gruver, Liliana Garces, Katharine Bobadilla
2020 Films
Unknown
15/08/2011
Thank you for supporting DVD365.net when you order using the link(s) below. As an Amazon Associate we earn from qualifying purchases
Buy DVD
Information

Revenge can be deadly. Prepare yourself for a journey of vengeance fuelled by the bond shared only by twins in the independent horror Second Coming, released on DVD on 15th August 2011 by 2020 Films.

Identical twin sisters, Lora and Ashley Gerritson (Julia Reeves) have always had a special connection; whatever one would feel, so would the other. The pair drift apart when Lora leaves their hometown to become a successful photographer in the big city, while Ashley remains behind to live a simple life working at the local diner.

As Lora settles into her new life, she has terrifying visions of Ashley and begins to fear for her sister's life. As Lora's worst fears are realised, she returns home to investigate Ashley's disappearance. It's not long before she begins to suspect that Barry Drake (Greg Thompson), a family man and upstanding member of the community, may hold the key to finding Ashley's whereabouts. As her visions become stronger, Lora must race against the clock to save Ashley, or prepare to exact her sister's revenge.

Written and directed by Jose Cassella, the story unfolds through a series of spine-chilling visions and haunting flashbacks. Nothing could prepare you for this deadly game of cat-and-mouse or for a sister's 'Second Coming'.

DVD
Released on DVD 4th April 2022 from BBC Worldwide, Golden Globe, Emmy and BAFTA winner Ben Whishaw stars in This Is Going To Hurt, Adam Kay's adaptation of his best-selling memoir about life as a junior doctor. END_OF_DOCUMENT_TOKEN_TO_BE_REPLACED
Top PicksView