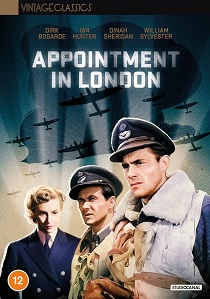 Dirk Bogarde stars as Tim Mason, the officer of a British bomber squadron in World War Two. A large-scale operation over Germany has been planned, and Tim is shocked to discover that he is not part of the team for the mission. Higher authorities think he is no longer at his best.

A member of his crew is injured just before take-off, so Tim takes his place as a gunner. Those left behind are furious at him for disobeying orders, but he must face far more dangers before he can return. With Ian Hunter and Dinah Sheridan.

Appointment In London is released on DVD and Blu-ray 27th June 2022 from StudioCanal as part of their Vintage Classics range.

HotUHD
After moving to a new town, two brothers discover that the area is a haven for vampires as the classic The Lost Boys is released on 4K UHD 20th September 2022 from Warner Home Video. END_OF_DOCUMENT_TOKEN_TO_BE_REPLACED
Top PicksView