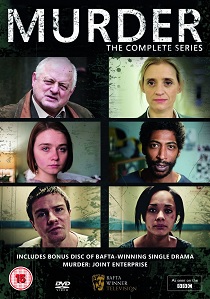 The innovative single drama Murder: Joint Enterprise, helmed by Birger Larsen - the director behind critically acclaimed Danish series The Killing, garnered a BAFTA award when it aired on the BBC Two and now, following the same unique format, the programme returns with three brand new films. They will air on BBC Two in March followed by a DVD release courtesy of RLJ Entertainment's Acorn Label.

Rich in forensic and psychological detail and with unique depth of characterisation, each of the films picks apart a murder in its terrible complexity. Murder: The Complete Series comes to DVD on 21st March 2016 with the original Murder: Joint Enterprise on a bonus disc.

The stories dig deep into character and motive to unearth the hidden truths behind the riverside killing of a Scottish doctor; the disappearance of a wealthy philanthropist from her lover's home; and the cold-blooded murder of an off-duty policeman, in: The Third Voice directed by Birger Larsen, Lost Weekend directed by Paul Wright (For Those in Peril) and The Big Bang directed by Iain Forsyth and Jane Pollard (Neil Gaiman's Likely Stories).

Co-creators Robert Jones (Ballykissangel) and Kath Mattock (Buried), spent months in the public galleries at the Old Bailey researching real-life cases for inspiration and authenticity and the films are intercut with CCTV footage, live action and forensic evidence. The protagonists speak to camera giving their version of events. The story is heard from every angle and casts the viewer as a jury-member, forcing us to decide: Guilty or Not Guilty?

UHD
Fast forward to the 1980s as Wonder Woman's next big screen adventure finds her facing a wide array of foes including Max Lord and The Cheetah as Wonder Woman 1984 flies in on Blu-ray and 4K UHD 22nd March 2021 from Warner ... END_OF_DOCUMENT_TOKEN_TO_BE_REPLACED
Top PicksView