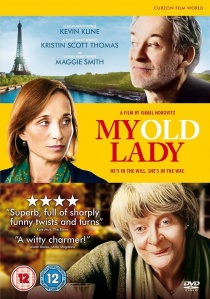 Mathias (Kevin Kline, Last Vegas) is a New Yorker who has never had much in terms of wealth. However, when his father passes away he inherits a valuable Parisian apartment and immediately sets out for France in order to liquidate this asset and end his money troubles.

Yet when he gets there he finds the property to be inhabited by a peculiar old woman (Maggie Smith, The Best Exotic Marigold Hotel) who refuses to leave and has more than just a bit of bad news for Mathias' plans to get rich - under French law not only does he not own the property until she dies but he must pay a fee for her to live there. But unbeknownst to Mathias, this set of circumstances may just turn out to be a blessing in disguise and a true life lesson.

My Old Lady is released on DVD and Blu-ray on 16th March 2015 courtesy of Curzon Film World.

DVD
Arriving on DVD and Blu-ray 31st May 2021 from Acorn Media (UK), the hit police corruption drama from the makers of Bodyguard returns as Series Six of Line of Duty sees AC-12 facing their most ... END_OF_DOCUMENT_TOKEN_TO_BE_REPLACED
Top PicksView