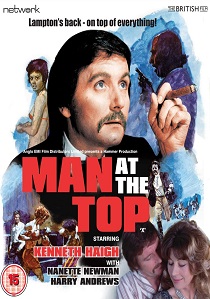 Kenneth Haigh, Nanette Newman and Harry Andrews give memorable performances in this hard-hitting film which traces the progress of Joe Lampton, the aggressively ambitious protagonist of John Braine's Room at the Top.

Offering a grittier treatment than both the 1959 film adaptation and the early '70s television series that followed, Man at the Top is featured here in a brand-new High Definition remaster from original film elements in its as-exhibited theatrical aspect ratio.

Northerner Joe Lampton becomes involved with Lord Ackerman, the powerful chairman of a pharmaceutical concern, his beautiful wife Alex and daughter Robin. But trouble starts when Joe is made Managing Director of one of Ackerman's companies and makes a shocking discovery: his predecessor committed suicide.

Man at the Top is released on Blu-ray 2nd March 2020 from Network.

DVD
In Brian And Charles, released on DVD and Blu-ray 10th October 2022 from Mediumrare, an inventor lives alone in a remote village in the countryside, inventing useless things out of found objects in his garage. That is until ... END_OF_DOCUMENT_TOKEN_TO_BE_REPLACED
Top PicksView