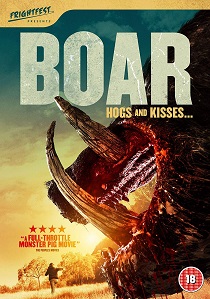 A giant pig runs amok in the outback in Boar, a bloody Ozploitation horror thriller featuring the stars of Wolf Creek, Mad Max and The Devil's Rejects, released on DVD 25th February 2019 from Signature Entertainment.

In the harsh, yet beautiful Australian outback lives a beast, an animal of staggering size, with a ruthless, driving need for blood and destruction. It cares for none, defends its territory with brutal force, and kills with a raw, animalistic savagery unlike any have seen before.

Believed nothing more than a myth, a legend brought to life by a drunken hunter, the beast ventures closer to civilization. When the bodies of two of its most recent victims are discovered, it is up to a locals, and an out-of-town family caught in the carnage, to halt the creature in its tracks.

A gritty and gruesome creature feature with a knockout cast, this is a Razorback for the 21st century, continuing the tradition of top-notch Aussie monster movies like Black Sheep and The Reef.