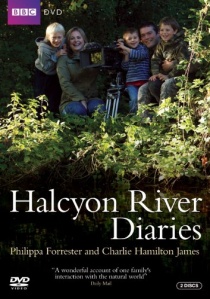 NewsTV SeriesComedyDrama
News Article Go back to homepage
Halcyon River Diaries, released by 2entertain on 17th January 2011 is like no other series on the television, on the face of it, a charming portrait of life by a typical English river told by award-winning wildlife cameraman Charlie Hamilton James and his wife, TV presenter and conservationist, Philippa Forrester.
Hugh Dennis, Philippa Forrester, Charlie Hamilton-James
Richard Taylor-Jones
Sam Organ, Cassian Harrison, Charlie Hamilton-James, Philippa Forrester
2Entertain
3 hours 54 minutes
17/01/2011
Thank you for supporting DVD365.net when you order using the link(s) below. As an Amazon Associate we earn from qualifying purchases
Buy DVD
Information

Halcyon River Diaries, released by 2entertain on 17th January 2011 is like no other series on the television, on the face of it, a charming portrait of life by a typical English river told by award-winning wildlife cameraman Charlie Hamilton James and his wife, TV presenter and conservationist, Philippa Forrester. But in reality, thanks to the challenges of filming with their three young sons, is an hilarious mix of wildlife and family life.

With much of the humour coming from the unpredictable and chaotic nature of family life, each episode is appropriately narrated by comedian and "Outnumbered" actor Hugh Dennis.

The series, which regularly attracted four million viewers, was filmed and produced by Charlie (whose camera credits include David Attenborough's Life of Mammals, Big Cat Diary, Wildlife on One and Autumn Watch) and Philippa (presenter of Tomorrow's World, Robot Wars and Crufts). Together they have also made the RTS winning and BAFTA nominated, Voices of the Valley, Emmy nominated Victoria Falls and multi award winning My Halcyon River, the original inspiration for Halcyon River Diaries.

Its subject is the stuff of The Wind in the Willows: the call, that captures the imagination of audiences everywhere, of the river. As children many of us, like Mole, found that call irresistible and spent happy hours messing about by the water - catching tiddlers, swinging on ropes or filling our boots with water. But what is really there to discover, when you combine the technology and techniques of a wildlife cameraman with a woman who is passionate about conservation?

Along the way the family make discoveries brand new to science such as whether otters really can smell under water and just how many times a dragonfly's wings flap in a second. They capture footage which has never been seen before which proves just how exciting and dramatic life on our British rivers really is.

From beautifully shot sequences of kingfishers battling in the mating season, to tracking otters at night with five year old Gus, Halcyon River Diaries is everything you have come to expect from BBC Natural History with so much more. Filmed over 12 months, the series features other challenges that many of us can relate to, like trying to encourage children away from the TV and computer games, and the trials and tribulations of family outings, as Charlie and Philippa try to discover with their robust and noisy three boys, the shy and secretive wildlife that surrounds them! The result is an hilarious wildlife documentary series made by a family, and loved by other families.

Coming to DVD for the first time in January 2011, Halcyon River Diaries is a two-disc DVD featuring all 4 x 60 minute episodes and packed with extras including riotous outtakes, a photo gallery and the delightful 9 minute film Watching the Wild: Otters which was filmed for BBC 2 by Charlie Hamilton James and his son Fred on the Isle of Skye.