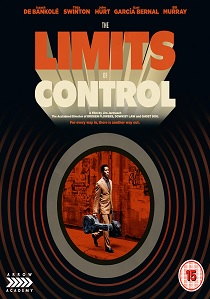 When it comes to American independent cinema, there's no one quite like Jim Jarmusch, the celebrated auteur behind such classics as Stranger Than Paradise and Only Lovers Left Alive. Eschewing his usual American landscapes in favour of a variety of locations throughout urban and rural Spain, his 2009 anti-thriller The Limits of Control remains one of his most alluring and multi-layered creations.

An enigmatic loner (Isaach de Bankolé, Black Panther, Ghost Dog: The Way of the Samurai) arrives in Spain, instructed to make contact with a series of strangers in different locations throughout the country, each of whom provides a cryptic clue which propels him further towards his mysterious goal. But who is the Lone Man? Why is he here? And how does the recurring figure of an alluring femme fatale (Paz de la Huerta, Enter the Void) fit into the puzzle?

Boasting stunning cinematography by the award-winning Christopher Doyle (In the Mood for Love) and featuring cameos from an array of celebrated character actors, including Tilda Swinton (The Grand Budapest Hotel), Gael García Bernal (Y Tu Mamá También) and the late John Hurt (Tinker Tailor Soldier Spy), The Limits of Control is a languid, hauntingly beautiful film that combines the best of American and European arthouse sensibilities.

The Limits of Control is released on Blu-ray 9th December 2019 from Arrow Video.

DVD
After more than thirty years of service as one of the Navy's top aviators, Pete 'Maverick' Mitchell is back where he belongs as Top Gun: Maverick flies onto DVD, Blu-ray and 4K UHD 31st October 2022 from Paramount Home ... END_OF_DOCUMENT_TOKEN_TO_BE_REPLACED
Top PicksView