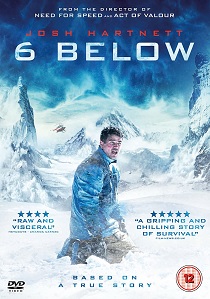 A recreational trip to the mountains becomes a test of human endurance and a fight for survival in the incredible 6 Below, arriving on DVD and Blu-ray 15th January 2018 courtesy of Signature Entertainment.

Eric LeMarque (Josh Hartnett; TV's Penny Dreadful, Lucky Number Slevin) is a thrill-seeking snowboarder with a weight of personal demons on his back. When he gets lost in a massive winter storm in the back country of the High Sierra Mountains, LeMarque is pushed to the limit and forced to battle those demons head-on as he fights against the worst the elements can throw at him.

Featuring a mesmerising tour de force from Hartnett as real-life hero LeMarque, 6 Below, also features Sarah Dumont (Don Jon, TV's The Royals) and Oscar-winner Mira Sorvino (Summer Of Sam, Mighty Aphrodite) as LeMarque's equally determined mother. With the wilds of Utah providing the film's backdrop and giving Hartnett a taste of what LeMarque went through in real life, director Scott Waugh (Need For Speed, Act Of Valor), 6 Below, deliver an assault on the senses that thrills - and chills - to the bone.

HotUHD
Just as relevant and incendiary now as it was three decades ago, King of New York returns 16th November 2020 on 4K UHD with guns blazing in this definitive special edition from Arrow Video, including a new director-approved 4K restoration. END_OF_DOCUMENT_TOKEN_TO_BE_REPLACED
Top PicksView