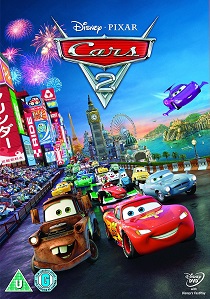 Disney Pixar's fast-action summer hit Cars 2 comes home on Blu-ray and DVD on 21st November 2011. Celebrating the 25th anniversary of Pixar Animation Studios, the high octane in-home release invites families and fans of all ages to come along on a journey around the world with the #1 animated film of the year and introduces an exclusive all-new animated short Air Mater, featuring the fan favorite character spinning his tales in an exciting adventure high above Radiator Springs. The must-own animated release also includes fascinating commentary from award-winning director John Lasseter and "Hawaiian Vacation", the delightful animated short that accompanied the film in theatres.

The immersive Cars 2 bonus features include an one-of-a-kind interactive "World Tour" map that takes viewers through nine different locations, including those featured in the film and more. A global thrill-ride, it allows viewers to go behind-the-scenes with the Pixar artists and filmmakers as they circle the globe finding inspiration for the most international of all Pixar films to date. Cars 2 is also the first Pixar film to be released in spectacular Blu-ray 3D.