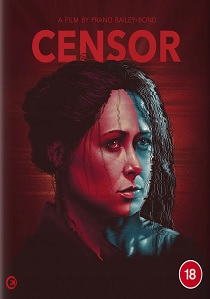 The film features the incredible Niamh Algar in a mesmerising performance as a dedicated, intense film censor during Britain's infamous 'video nasty' era, whose work slowly becomes intwined with her past, in this brilliantly dark and disturbing British horror.

Enid (Algar - Deceit, The Virtues) spends her days meticulously watching and assessing gruesomely violent and disturbing movies, taking her work as a film censor very seriously. She holds a strong sense of responsibility in protecting audiences from extreme content, subconsciously driven by the guilt she holds from a disturbing childhood trauma.

When a troubling film lands on her desk, Enid finds herself embroiled in the story and slowly starts to uncover some of her lost memories that seem strangely similar to the film. Consumed by the need to find if there is a connection between the production and the disappearance of her sister, her life spirals out of control, descending into darkness and danger.

A slew of special features accompany the release including three brand-new audio commentaries and new interviews with cast and crew and much more.

HotDVDBD
From the producers of Nobody and John Wick comes a bare-knuckle, coal-dark holiday action-comedy that says you should always bet on red as Violent Night sledges in on DVD and Blu-ray 6th March 2023 from Warner Home Video. END_OF_DOCUMENT_TOKEN_TO_BE_REPLACED
Top PicksView