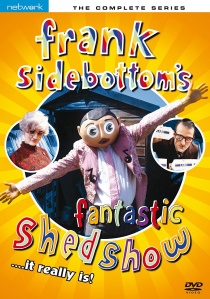 Network DVD are releasing Frank Sidebottom's Fantastic Shed Show: The Complete Series on 8th November 2010. The alter ego of multi-talented songwriter, former Freshies frontman, illustrator and animator Chris Sievey, Frank Sidebottom sprang to national fame in the mid-1980s with his soul-stirring interpretations of hits such as Bohemian Rhapsody and Anarchy in the UK.

Frank's surreal, distinctly Mancunian humour garnered a legion of loyal fans, and in 1992 the aspiring pop star, Altrincham FC fan, occasional Granada reporter and self-styled Bard of Timperley launched his very own TV show, broadcast from the converted shed that functioned as his showbiz HQ. Also featuring diminutive sidekick Little Frank, the shows include Frank's take on Crimewatch, Timperley's contribution to Manchester's Olympic bid, pioneering rocket science in the back garden, and even a staging of Live Aid 2!

DVD
In The Undoing, released on DVD and Blu-ray 22nd March 2021 from Warner Home Video, a chasm opens up in the seemingly perfect life of a successful therapist: a violent death, a missing spouse, and a ... END_OF_DOCUMENT_TOKEN_TO_BE_REPLACED
Top PicksView