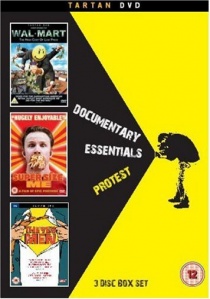 News
News Article Go back to homepage
The best things come in threes and in October, Tartan is releasing a double dose of triple-disc boxsets, with the three-disc boxset Supersize Me/Wal-Mart/Yes Men which examines the ethical nature of our lives.
Chris Smith, Dan Ollman, Morgan Spurlock, Robert Greenwald, Sarah Price
Alexander Burke, Brian M. Beirau
Tartan Video
4 hours 45 minutes
22/10/2007
Thank you for supporting DVD365.net when you order using the link(s) below. As an Amazon Associate we earn from qualifying purchases
Buy DVD
Information

The best things come in threes and in October, Tartan is releasing a double dose of triple-disc boxsets, with the three-disc boxset Supersize Me/Wal-Mart/Yes Men which examines the ethical nature of our lives. The boxsets are limited editions and are available for a limited period.

Morgan Spurlock's controversial but compelling documentary explores the truth behind the health risks of fast food and in particular McDonald's. For a whole month, he agrees to only eat from a McDonald's menu. He continuously films himself over that time periods, recording his own thoughts and state of health, whilst also interviewing nutritionists, specialists and individuals who live off fast food.

The results are both entertaining and sobering. A film that has become a cultural icon, inspiring on-going health campaigns including Jamie Oliver's school dinners crusade. The wider issues of the burger industry are dramatised in Richard Linklater's recent DVD release Fast Food Nation, based on Eric Schlosser's best-selling book

The ethics of big business come under the spotlight in this enlightening documentary about the working practices of Wal-Mart, the world's largest supermarket store. Owners of Asda stores in UK. Despite being one of the most powerful corporations in the world, it is also heavily criticised for business ethics. It has banned union activity and employs cheap labour in the developing world whilst accused of damaging the environment and destroying local communities.

Director Robert Greenwald has made a reputation for himself as a campaigning filmmaker with a social conscience. He has taken current affairs and turned them into crusading forums which address our modern global multi-national culture.

Mike Bonanno and Andy Bichlbaum, 'the Yes Men' are two media-savvy anti-globalisation protesters. Posing as members of the World Trade Organisation, they attend international conferences offering outrageous suggestions about working practices or free trade initiatives. Directed by the collaborative team of Dan Ollman, Sarah Price, and Chris Smith, The Yes Men is a lively, thought-provoking documentary with a satirical edge.

Documentaries such as Super Size Me, Fahrenheit 9/11 and The Corporation have helped feed the public's hunger for films that explore and even explode aspects of the current world around us and it echoes the antics of British comedy terrorist figures such as Chris Morris, Mark Thomas, Ali G and Private Eye, seducing the establishment into exposing its absurdities or hypocracies.

BD
A 13-year-old girl named Meilin turns into a giant red panda whenever she gets too excited in Disney and Pixar's 25th feature film Turning Red, released on DVD, Blu-ray and 4K UHD 2nd May 2022 from Walt Disney Home ... END_OF_DOCUMENT_TOKEN_TO_BE_REPLACED
Top PicksView