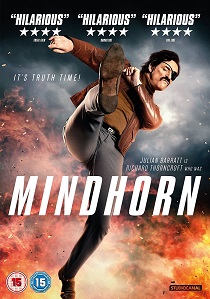 Mindhorn, released on DVD and Blu-ray 4th September 2017 from StudioCanal, is a comedy in which a faded TV star reprises his role as a renegade detective to help the Manx police force solve a murder case.

The film follows Richard Thorncroft (Julian Barratt), a washed-up actor who enjoyed fleeting success in the 1980s playing a TV detective named Mindhorn. Now living in poverty in London after throwing his career away trying to make it in Hollywood, Thorncroft has been left to watch on helplessly as his glamorous ex-girlfriend and former co-star Patricia Deville (Essie Davis) continues to find success as a news reporter and is now happily married to his former stunt double Clive Parnevik (Simon Farnaby).

However, despite his desperate situation, Thorncroft is suddenly given another shot at stardom when a crazed fugitive obsessed with his old TV show contacts police and demands to negotiate with Mindhorn in a bid to prove his innocence.