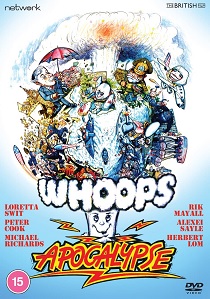 Chaos ensues when a US-backed Central American regime invades a nearby British dependency. When subsequent peace talks are sabotaged by a corporately-funded world-class assassin, events begin to run away with themselves - in the direction of nuclear armageddon!

Whoops Apocalypse is released on DVD and Blu-ray 1st August 2022 from Network.