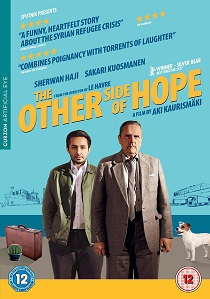 Khaled (Sherwan Haji) arrives at the port of Helsinki concealed in a coal container, fleeing war-torn Syria to seek asylum in Finland. Dazed and frustrated by the monolithic administration he encounters at the detention centre, he makes a break for it and heads out onto the streets. There he meets Wikström (Sakari Kuosmanen), a former shirt salesman who has recently left his alcoholic wife for a new life as a bachelor restaurateur. Together, they help each other to navigate the adversities they face in these unfamiliar and often baffling new worlds.

With hilarious sight gags, poker-faced one liners and a toe-tapping rockabilly soundtrack, Kaurismäki's latest balances his unparalleled wit with a pressing critique of the unforgiving bureaucracy that greets vulnerable asylum seekers in modern-day Europe. Humane and sincere, it's proof of cinema's power to tell stories that matter, with beauty and heart.

The Other Side Of Hope is released on DVD and Blu-ray 24th July 2017 from Curzon Artificial Eye.

HotDVDBDUHD
An action thriller unlike any other, a young getaway driver relies on the beat of his personal soundtrack to be the best in the game in Baby Driver, the newest explosion of genre-crossing excitement from writer-director Edgar Wright, released on 4K Ultra HD, Blu-ray and DVD ... END_OF_DOCUMENT_TOKEN_TO_BE_REPLACED
Top PicksView