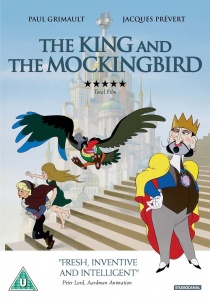 News
News Article Go back to homepage
To celebrate the 30th anniversary of its first release in the UK, The King And The Mockingbird will be re-released in a fully restored version by StudioCanal, available on DVD from 28th April 2014.
Hubert Deschamps, Renaud Marx, Agnès Viala, Raymond Bussières, Pascal Mazzotti, Jean Martin
Paul Grimault, Paul Grimault
StudioCanal
1 hour 23 minutes
28/04/2014
#TheKingAndTheMockingbird
Thank you for supporting DVD365.net when you order using the link(s) below. As an Amazon Associate we earn from qualifying purchases
Buy DVD
Information

To celebrate the 30th anniversary of its first release in the UK, The King And The Mockingbird will be re-released in a fully restored version by StudioCanal, available on DVD from 28th April 2014.

Based on a beloved Hans Christian Andersen fairy tale, the film follows a chimney sweep and shepherdess who seek to escape from the clutches of a tyrannical king. A hugely influential animation, as well as a wonderfully crafted family film, The King And Mockingbird is credited by celebrated Japanese animators Hayao Miyazaki and Isao Takahata as inspiring them with everything that animation could be. Studying it closely, the lessons they learned fuelled the creation of their own studio, the now world famous Studio Ghibli.

Now celebrated by many as one of the finest feature films in the history of animation, The King And The Mockingbird was 30 years in the making, a labour of love and story of artistic passion that typifies the work of one of France's most renowned animators - the highly influential Grimault and the acclaimed poet and screenwriter Prévert (The Crime of Monsieur Lange, Les Enfants Du Paradis, Le Quai Des Brumes).

Grimualt and Prévert started working on the film in 1947, when it was planned to be France's first animated feature. A dispute stopped production however and the film was released unfinished by its producer, without Grimault and Prévert's permission. Grimault spent 10 years getting the rights back and another 20 raising the money to finish the film as he and Prévert had first envisaged it. This happened finally in 1979, tragically a few weeks after Prévert's death.

The film won the Louis Delluc prize in 1979 and has been a classic favourite for French audiences throughout the decades. On its re-release last year in France, it made over 900,000 euros at the French box office.

The film was released for the first time in the UK in 1984 to great acclaim and has continually inspired modern day animators. The influence on Studio Ghibli can be seen in Miyazaki's directorial feature debut Castle of Cagilostro in which we see clear echoes of the rooftops and trapdoors of Grimault's castle and visual references to Grimault's robot in Miyazaki's warrior-gardeners in Laputa, Castle in the Sky. The King And The Mockingbird was Studio Ghibli's first release on their Museum Library distribution label in 2007.

Celebrated for its gorgeous visual design, smooth animation and beautiful piano and string music by Wojciech Kilar (The Pianist, Bram Stoker's Dracula), the film's real glory for so many lies in its characters - from the portrait of the villain King to the blind man playing his hurdy-gurdy, all are full of wit and humour. The King And The Mockingbird is a life-affirming fairy tale film, full of magic and humour, restored to delight a whole new generation of families.

BD
A 13-year-old girl named Meilin turns into a giant red panda whenever she gets too excited in Disney and Pixar's 25th feature film Turning Red, released on DVD, Blu-ray and 4K UHD 2nd May 2022 from Walt Disney Home ... END_OF_DOCUMENT_TOKEN_TO_BE_REPLACED
Top PicksView