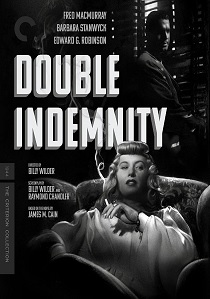 NewsDramaCrimeBarbara StanwyckCriterion
News Article Go back to homepage
Double Indemnity, released on Blu-ray 30th May 2022 from Sony Pictures Home Entertainment, is one of the most wickedly perverse stories ever told and the cynical standard by which all noir must be measured.
Fred MacMurray, Barbara Stanwyck, Edward G. Robinson, Porter Hall, Jean Heather, Tom Powers
Billy Wilder
Joseph Sistrom
Sony Pictures Home Entertainment
1 hour 48 minutes
30/05/2022
#DoubleIndemnity
Thank you for supporting DVD365.net when you order using the link(s) below. As a member of the Zavvi affiliate program we earn from qualifying purchases
Buy BD
Information

Has dialogue ever been more perfectly hard-boiled? Has a femme fatale ever been as deliciously evil as Barbara Stanwyck (The Lady Eve)? And has 1940s Los Angeles ever looked so seductively sordid? Working with cowriter Raymond Chandler, director Billy Wilder (Ace in the Hole) launched himself onto the Hollywood A-list with this paragon of film-noir fatalism from James M. Cain's pulp novel.

When slick salesman Walter Neff (Fred Macmurray - The Caine Mutiny) walks into the swank home of dissatisfied housewife Phyllis Dietrichson (Stanwyck), he intends to sell her insurance, but he winds up becoming entangled with her in a far more sinister way.

Featuring scene-stealing supporting work from Edward G. Robinson and the chiaroscuro of cinematographer John F. Seitz (Sunset Blvd.), Double Indemnity is one of the most wickedly perverse stories ever told and the cynical standard by which all noir must be measured.

Double Indemnity is given the Criterion treatment and released on Blu-ray 30th May 2022 from Sony Pictures Home Entertainment.

DVD
Catherine finally takes the Russian throne for her own - but if she thought coup-ing her husband was difficult, it's nothing compared to the realities of liberating a country that doesn't want to be in The Great: Season Two, ... END_OF_DOCUMENT_TOKEN_TO_BE_REPLACED
Top PicksView