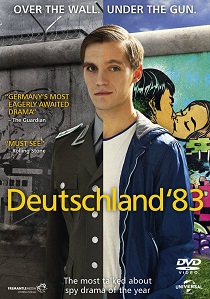 Deutschland 83, released on DVD by Universal Pictures (UK) on 15th February 2016, is a groundbreaking new series from the producers of the international Emmy award-winning Generation War.

It's 1983. The Cold War is hot. Russian SS20 Missiles in East Germany are already pointed West. American Pershing II Missiles will soon be placed in West Germany, pointing East. The threat of nuclear conflict looms. Our hero, Martin Rauch (Jonas Nay), is 23. Born and raised in East Germany, he is sent undercover, as Moritz Stamm, to West Germany, to work for a top General in the Bundeswehr.

Officially, his job is to gather intelligence on the placement of the Pershing II Missiles. A secondary gig develops, infiltrating youth culture through close relationships with the General's two children. But nothing and no one are as they seem.

Deutschland 83 is a coming-of-age story within a suspenseful thriller, set against the real events, culture wars and political realities of Germany in the 1980s.

DVD
As a collection of history's worst tyrants and criminal masterminds gather to plot a war to wipe out millions, one man must race against time to stop them in The King's Man, released on DVD, Blu-ray and 4K UHD 28th February ... END_OF_DOCUMENT_TOKEN_TO_BE_REPLACED
Top PicksView