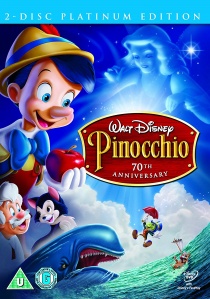 Pinocchio, Walt Disney's masterpiece of classic animation, has been released from the Disney vault as a special two disc 70th anniversary Platinum Edition on Disney Blu-ray and DVD on 9th March 2009 for a limited time only.

The landmark film that taught us to Wish Upon a Star and popularised the idea that your nose grows when you tell a lie has been digitally re-mastered. Packed full of all-new bonus features, film fans will finally be able to relive the full charm and humour of one of Disney's most revered films.

Winner of two Academy Awards ® for best score and best song for Wish Upon A Star, Pinocchio fans can now enjoy this timeless film with brilliantly restored picture and sound. The story follows Pinocchio and his sharply-suited sidekick, Jiminy Cricket, as the puppet embarks on a quest to prove himself worthy of becoming a real boy.

Extras include "No Strings Attached", which is a behind the scenes look at the making of this groundbreaking film. "Sweat Box" explores the secrets of Walt Disney's creative process and includes archival photography and "Story of the Grandfather Tree" contains previously unseen footage along with an alternate opening to the film.

Additional Blu-ray extras include a Cine-Explore Newsreel, Pinocchio knows Trivia Challenge and Disney Smarts: Jiminy's Word Builder. Universally considered one of the best films of all time, add this classic to your collection when Pinocchio is released on Disney DVD and Blu-ray disc on March 9th - available from the Disney vault for a limited time only.

Pinocchio, a wooden puppet, is brought to life by the Blue Fairy, with the promise that he can become a real boy if he proves himself worthy. But trouble begins when Pinocchio is led astray by the wicked Honest John and his companion Gideon, handing him over to an evil puppeteer, Stromboli.

Pinocchio becomes Stromboli's star attraction in a puppet show and is kept locked in a cage. With the help of the Blue Fairy and his friend Jiminy Cricket, Pinocchio manages to escape, but finds himself under the malevolent influence of Honest John and Gideon again, who lead him to the anarchic Pleasure Island, a place that carries an unusual curse for boys who 'make jackasses of themselves'. With the wooden puppet going stumbling from one misfortune to the next, his 'father', the toy-maker Geppetto, also sets out on a rescue mission of his own. But both find themselves all at sea and in a spot of hot water when confronted by the gigantic whale, Monstro. Will Pinocchio be able to save himself and Geppetto from the whale and prove himself worthy of becoming a real boy?