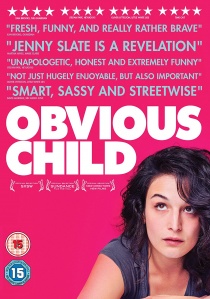 Following one woman's haphazard journey through her late twenties, refreshing, honest, relatable and hilarious, Obvious Child, is released on DVD on 19th January 2015 courtesy of Koch Media, is a comedy like no other.

Obvious Child is the story of unapologetic Brooklyn comedian Donna Stern (Jenny Slate), a twenty-something loose cannon who gets dumped, fired and pregnant in quick succession. Better at cracking jokes about her flatulence and the contents of her knickers in her weekly stand-up routine than doing her taxes, Donna has a lot of growing up to do. With her parents nudging her to take control of her life, Donna is forced to do just that when she falls pregnant following a one-night stand with clean-cut, sensible Max (Jake Lacy) - a guy not remotely her type - and decides to seek the choice most responsible to her future. With the support of her friends Nellie (Gaby Hoffmann) and Joey (Gabe Liedman), Donna learns how to be brave, honest and vulnerable in real life; not just on stage.

Benefitting from Kickstarter funding, Obvious Child went down a storm on its debut at Sundance, gaining praise from audiences and critics alike, and has continued to pique interest on both sides of the pond. A unique and authentic perspective on what it is to be a modern woman, Obvious Child was 2014's unmissable comedy.

HotDVDBDUHD
Released on DVD, Blu-ray and 4K UHD 14th June 2021 from Warner Home Video, legends collide in Godzilla vs. Kong as these mythic adversaries meet in a spectacular battle for the ages, with the fate of the world hanging in the balance. END_OF_DOCUMENT_TOKEN_TO_BE_REPLACED
Hot PicksView