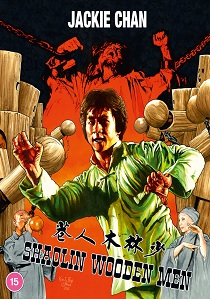 This time Jackie is on a mission of revenge. As a young boy he witnesses the slaying of his father at the hands of deadly masked kung fu assassin. Once Jackie is old enough, he trains as a mute at a shaolin temple to learn the techniques that will enable him to one day avenge the death of his father. What he doesn't realise though is that he is actually training in the lair of the man he seeks to kill!

Jackie has to gradate and defeat a gauntlet of mysterious robotic wooden men who throw every kung fu style at him before he can even face up to his nemesis.

Packed with startling action courtesy of Half a Loaf of Kung Fu director Chen Chi-Hwa, this is another early Jackie Chan classic that's not to be missed by those seeking fine martial arts entertainment!