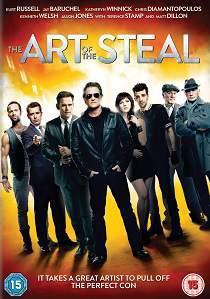 A team of pros attempt the perfect con in the hilarious heist thriller The Art Of The Steal, available on Digital HD 13th October 2014 and Blu-ray & DVD 27th October 2014. Kurt Russell (Death Proof) leads a first-rate cast in this entertaining and fast-paced comic tale about a third-rate motorcycle daredevil and part-time art thief who teams up with his brother to steal one of the most valuable books in the world. Written and directed by Jonathan Sobol (A Beginner's Guide to Endings), The Art Of The Steal co-stars Jay Baruchel (This is the End), Katheryn Winnick (TV's Vikings), Oscar® nominee Terence Stamp (Best Supporting Actor, Billy Budd, 1963) and Oscar® nominee Matt Dillon (Best Supporting Actor, Crash, 2006).

Also featuring Chris Diamantopoulos (TV's Arrested Development), Kenneth Welsh (The Aviator), and Jason Jones (Pitch Perfect), The Art Of The Steal has stolen top notices from critics around the world, including IGN who called it a ton of fun in the vein of Ocean's Eleven, a must-watch if you're a fan of crime capers.

Bonus features on the Blu-ray and DVD include Audio Commentary with Writer/Director Jonathan Sobol and Producer Nicholas Tabarrok and 3 Behind-the-Scenes Featurettes: Doing the Crime: Making The Art of the Steal, featuring cast and crew interviews; Getting Away With It: Inside The Art of the Steal, a three-part look at the film's development, casting, and direction; and The Making of the Theft of the Mona Lisa, a visual effects featurette revealing how digital imaging was used to create the film's hilarious and historic Theft of the Mona Lisa scene.

Crunch Calhoun (Russell), a third rate motorcycle daredevil and semi-reformed art thief, agrees to get back into the con game and pull off one final lucrative art theft with his untrustworthy brother, Nicky (Dillon). Reassembling the old team, Crunch comes up with a plan to steal a priceless historical book, but the successful heist leads to another far riskier plan devised by Nicky. They fail to realize each other's seperate agendas when their plan goes awry in this con comedy about honor, revenge and the bonds of brotherhood.