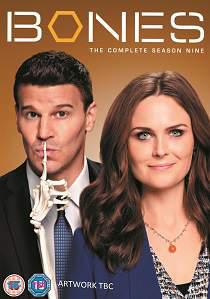 Dr Brennan "Bones" Temperance (Emily Deschanel: Boogeyman, Spider-Man 2) is a highly skilled forensic anthropologist who works at the Jeffersonian Institute in Washington D.C., and writes novels on the side. While most people can't handle Brennan's intelligence, her drive for the truth or the way she flings herself headlong into every investigation, Special Agent Seeley Booth (David Boreanaz: Buffy the Vampire Slayer, Angel) is an exception. A member of the FBI's Homicide Investigations Unit he mistrusts science and scientists but even he cannot deny that the combination of his people-smarts and Brennan's scientific acumen makes them a formidable duo.

After tech genius and serial killer Christopher Pelant (Andrew Leeds: NCIS: Los Angeles, Bad Teacher) once again toyed with the Jeffersonian team in season eight's conclusion, season nine begins in rocky territory. Pelant forced Booth to call off his engagement to Brennan threatening the lives of innocent people if he went through with the marriage or even told her why he was turning her down. Following this show down Brennan begins the new season questioning the viability of her relationship with Booth. How can Booth win back her trust without being able to reveal the reason for turning down her marriage proposal? Will Pelant manage to thwart the marriage that we've all been waiting for? "Bones" finds herself in a difficult situation juggling the consistent presented murder cases as well as dealing with not knowing the real reason Booth denied her.

Bones: The Complete Season Nine DVD comes packed with extras including deleted scenes, a Walking Down The Aisle Bones Style featurette and exclusive audio commentary on The Woman in White.