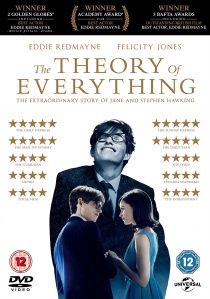 Love, family, and genius powerfully combine as the brilliant astrophysicist Professor Stephen Hawking and his courageous wife Jane live extraordinary lives against all odds in The Theory of Everything, an inspiring love story coming to DVD and Blu-ray on 11th May 2015 from Universal Pictures (UK).

Based on Jane Hawking's memoir Travelling to Infinity: My Life with Stephen and directed by Academy Award® winner James Marsh (Man on Wire), the acclaimed film is an unforgettable portrait of a singular marriage and the two exceptional souls who built it. The Theory of Everything was nominated for five Academy Awards® including Best Picture, Best Actor, Best Actress, and Best Adapted Screenplay (screenwriter, Anthony McCarten).

Once a healthy, active young man, Hawking receives an earth-shattering diagnosis at 21 years of age. With Jane fighting tirelessly by his side, Stephen embarks on his most ambitious scientific work, studying the very thing he now has precious little of-time. Together, they defy impossible odds, breaking new ground in medicine and science, and achieving more than they could ever have dreamed.

Related Articles
The Mercy, Shadow Dancer, Project Nim, King of Thieves
Early Man, Early Man, The Danish Girl, Jupiter Ascending, Birdsong, My Week with Marilyn, The Pillars of The Earth, Black Death, Glorious 39, Fantastic Beasts: The Crimes of Grindelwald, Fantastic Beasts: The Secrets of Dumbledore
Inferno, Collide, A Monster Calls, Inferno, The Invisible Woman, The Amazing Spider-Man 2, Breathe In, Cheerful Weather for the Wedding, Hysteria, Like Crazy, Chalet Girl, On the Basis of Sex, Dragon Rider, The Last Letter From Your Lover
Anthropoid, The Riot Club, The Wife
For your consideration 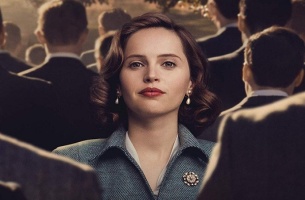 HotDVD
Follow the revolutionary lawyer turned U.S. Supreme Court Justice Ruth Bader Ginsburg, as she fights to overturn over a century of gender discrimination in the uplifting drama On the Basis of Sex, released on DVD 24th June 2019, from Entertainment One. END_OF_DOCUMENT_TOKEN_TO_BE_REPLACED
Comments
DVD Releases News Pick

DVD
After more than thirty years of service as one of the Navy's top aviators, Pete 'Maverick' Mitchell is back where he belongs as Top Gun: Maverick flies onto DVD, Blu-ray and 4K UHD 31st October 2022 from Paramount Home ... END_OF_DOCUMENT_TOKEN_TO_BE_REPLACED
Top PicksView