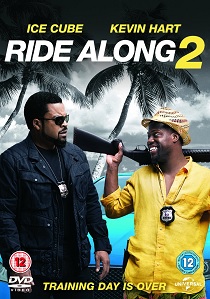 Fasten your seatbelts and brace yourselves for another wild ride when Kevin Hart (Get Hard, The Wedding Ringer) and Ice Cube (22 Jump Street, Barbershop) return in the hilarious, action-packed comedy, Ride Along 2, coming to Blu-ray and DVD on 30th May 2016, from Universal Pictures (UK).

The Blu-ray and DVD feature even more of the duo's hysterical banter and explosive fun with a gag reel and never-before-seen bonus material, including a hilarious new recruitment video Ride Along With Us.

Ride Along 2 reunites the partners and brothers-in-law-to-be as they take on new crime in Miami. The absurdity quickly unfolds while tough cop and all-around cool guy James (Ice Cube) works to solve a major case with the mouthy wannabe Ben (Kevin Hart). In the riotous sequel to the action-comedy hit that first brought together the hilarious mismatched cops, "Ice Cube and Kevin Hart are the comedy duo of the year!" according to Dave Morales, KRIV-TV (Fox).

Related Articles
Jumanji: Welcome to the Jungle, Jumanji: Welcome To The Jungle, Captain Underpants: The First Epic Movie, The Secret Life of Pets, Central Intelligence, The Wedding Ringer, About Last Night, Ride Along, Think Like A Man, Soul Plane, Night School, The Upside, The Secret Life of Pets 2, Jumanji: The Next Level, DC League of Super-Pets
The Lego Ninjago Movie, Office Christmas Party, Mortdecai, Deliver Us From Evil, The Babymakers, The Predator
Fist Fight, The Book of Life, Ride Along, Boyz N The Hood, First Sunday, Are We Done Yet?, Three Kings, Boyz N The Hood, The High Note, Trespass
The Guernsey Literary And Potato Peel Pie Society
Run All Night, Ride Along, Law Abiding Citizen, Vantage Point, Elizabethtown, The Insider, National Lampoon's Animal House: Collector's Edition, Runaway Jury, The Sum of all Fears, Collateral
One For The Money, Guess Who
Think Like A Man Too, Ride Along, Think Like A Man, Tom & Jerry The Movie
Comments
DVD Releases News Pick