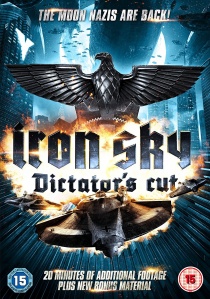 20 minutes longer and loaded with new visual effects, the worldwide box office phenomenon Iron Sky is back as the Dictator's Cut is released on DVD and Blu-ray on 10th February 2014, courtesy of 4Digital Media.

In 1945 the Nazis flew to the Dark Side of the Moon, and established a secret hideout, where they've been preparing for their grand return. The year is 2018, and the Americans return to the Moon in search for powerful energy source, Helium-3.

They end up landing too close to the secret Nazi fortress, and although the big Nazi weapon "Götterdämmerung" is not yet ready to be deployed, soon the skies are full of iron, as the Nazi war machines take a pre-emptive move against threat from Earth.

The Dictator's Cut of Iron Sky is an all-new take on the film, following the original vision of the director Timo Vuorensola. This version is 20 minutes longer, loaded with new visual effects, new music from Laibach - and, of course, tons of new, politically incorrect humour.

BD
In The Black Phone, released on DVD and Blu-ray 3rd October 2022 from Warner Home Video, a teenage boy is abducted by a sadistic killer and discovers a phone in his basement cell that allows him to communicate with the killer ... END_OF_DOCUMENT_TOKEN_TO_BE_REPLACED
Top PicksView