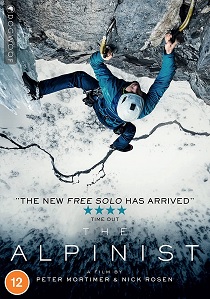 NewsTV SeriesSpecial Interest
News Article Go back to homepage
The Alpinist, released on DVD and Blu-ray 24th January 2022 from Dogwoof, is an intimate documentary of a visionary climber who follows the path of his own passion, despite the heaviest of possible consequences.
Marc-Andre Leclerc, Brette Harrington, Peter Mortimer, Alex Honnold
Peter Mortimer, Nick Rosen
Ben Bryan
Dogwoof
1 hour 33 minutes
24/01/2022
#TheAlpinist
Thank you for supporting DVD365.net when you order using the link(s) below. As an Amazon Associate we earn from qualifying purchases
Buy DVD
Buy BD
Information

As the sport of climbing turns from a niche pursuit to mainstream media event, Marc-André Leclerc climbs alone, far from the limelight.

On remote alpine faces, the free-spirited 23-year-old makes some of the boldest solo ascents in history. Yet, he draws scant attention. With no cameras, no rope, and no margin for error, Marc-André's approach is the essence of solo adventure.

Intrigued by these quiet accomplishments, veteran filmmaker Peter Mortimer (The Dawn Wall) sets out to make a film about Marc-André. But the Canadian soloist is an elusive subject: nomadic and publicity shy, he doesn't own a phone or car, and is reluctant to let the film crew in on his pure vision of climbing.

As Peter struggles to keep up, Marc-Andrés climbs grow bigger and more daring. Elite climbers are amazed by his accomplishments, while others worry that he is risking too much. Then, Marc-André embarks on a historic adventure in Patagonia that will redefine what is possible in solo climbing.

The Alpinist, released on DVD and Blu-ray 24th January 2022 from Dogwoof, is an intimate documentary of a visionary climber who follows the path of his own passion, despite the heaviest of possible consequences.

DVD
For the first time in the cinematic history of Spider-Man, our friendly neighborhood hero's identity is revealed in Spider-Man: No Way Home, released on DVD, Blu-ray and 4K UHD 4th April 2022 from Sony Pictures Home ... END_OF_DOCUMENT_TOKEN_TO_BE_REPLACED
Top PicksView