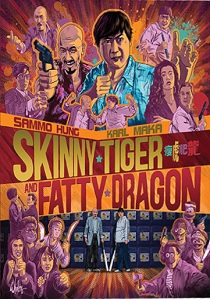 Skinny Tiger and The Fatty Dragon (1990)

Sammo Hung stars in the high-energy action-tribute to the films of Bruce Lee as Skinny Tiger and The Fatty Dragon arrives on Blu-ray 22nd February 2022 from Eureka.

Skinny Tiger And Fatty Dragon is available on Blu-ray for the first time in the UK from a brand new 2K restoration as part of the Eureka Classics range and is available as a Limited-edition 2-Disc set (3000 copies only) featuring I Am The White Tiger; a documentary on the career of stuntman, martial artist, and action director Mark Houghton; making its worldwide debut on Blu-ray.

Sammo Hung invokes the spirit of Bruce Lee in this high-energy action-tribute, playing a cop obsessed with the physical legacy of "The Little Dragon".

Teaming up with the infamous "Skinny Tiger"! (Karl Maka - the Aces Go Places series), Sammo becomes the larger 'half' of a luck-starved, crime fighting duo forced to fight a running battle against a crime syndicate of triad gangsters.