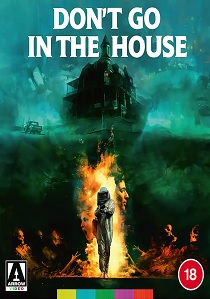 A legendary title from the Video Nasties era, Joseph Ellison's relentlessly bleak and disturbing Don't Go In The House has lost none of its power to shock in the decades since it was first censored by the BBFC and seized by UK authorities.

Donny Kohler (The Sopranos' Dan Grimaldi in a gripping central performance), a disturbed loner unhealthily obsessed with fire, comes home from his factory job one day to find his abusive mother has died.

Now all alone in the large Gothic mansion he calls home and consumed in an inferno of insanity, he is finally able to fulfil his violent revenge fantasies against her. Soon, any woman unlucky enough to enter is forced to come face to face with the worst fate imaginable in the secret steelclad chamber of death he has built in the house's depths...

Now fully uncut and making its UK high definition premiere in a brand new 2K restoration on 7th February 2022 from Arrow Video, the film that dares to ask "What if Norman Bates had a flamethrower?" is back in a definitive collectors' edition with both original and extended versions.