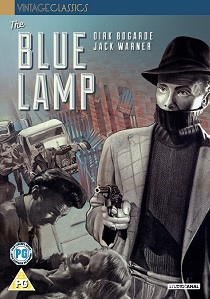 StudioCanal proudly announce another Vintage Classics restoration of Ealing Studios' classic The Blue Lamp, on Blu-Ray for the first time and DVD & EST in fully restored 2K from 12th December 2016.

Starring BAFTA award-winning English acting legend Dirk Bogarde (The Servant, Darling) in a role which catapulted him to stardom, alongside Jack Warner (Dixon of Dock Green, The Square Ring) and Jimmy Hanley (It Always Rains On Sunday), The Blue Lamp was the first, and arguably still the most famous of all British Police films, and the inspiration for long-running television series Dixon of Dock Green.

London after the Second World War: Long-serving policeman PC George Dixon (Warner) and his latest recruit (Hanley) go about their daily routine. When they arrive at the scene of a botched robbery at the local cinema the old policeman confronts the villain (Bogarde) and subsequently gets caught in the crossfire. In a rare turn of events the community and the underworld work together with the Law, to track down the villain and mete out the punishment he deserves.