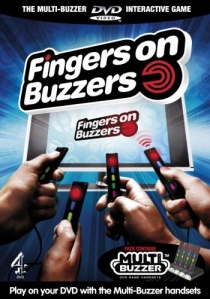 News Article Go back to homepage
A revolution in interactive gaming is upon us with the launch of Fingers On Buzzers, released by 4DVD on 26th November 2007, a brand new, hugely entertaining DVD game in which, unlike previous DVD games, the players each have their own handset.
4DVD
Unknown
26/11/2007
Buy DVD
Information

A revolution in interactive gaming is upon us with the launch of Fingers On Buzzers, a brand new, hugely entertaining DVD game in which, unlike previous DVD games, the players each have their own handset. There will be no more passing around of the remote control as this new multiplayer game for all the family means the fun flies at a pace in this hilarious quiz game with a difference. Released by 4DVD on 26th November 2007, Fingers On Buzzers offers not only multiplayer ability but also another big difference to all its predecessors - speed.

Fingers On Buzzers is fast and furious and never, ever boring, whether you're a bubbly kid, a surly teen, a hip dad or a groovy granny, the slick graphics, tongue-in-cheek humour and playability of Fingers On Buzzers means it's the ideal DVD for anyone hungry to test their mental agility. Players will find Fingers On Buzzers easy to set up and instantly playable, be it in a head to head battle or all four players in action at once, the comical and cheeky voice of the quiz master is there to guide them through the game.

Each game can be played in a long (25 minutes) or short (12 minutes) version and between two to four players, each with an individual handset and character. The glamour and glitz of a game show can be brought directly into your living room as players choose their character and settle into their virtual living room in the game where the contestants cheer, high five, goad each other and the resident dog reacts to the scores. To top it all off, the players can revel in their glory as their own virtual characters celebrate and lord it over the losers!

Each game starts with a simple warm up round to get players used to the Multi-Buzzer functionality. Following this are randomly selected rounds, including entertainment, sport, observational tasks, snap and parlour games. There's also the brainiac fare of politics, geography and history as Fingers On Buzzers twists and turns to give something for everyone.

There are plenty of opportunities to breed family competitiveness. With a randomly selected round in which players can shake up the scores by stealing other player's points, swapping players scores and where the winners can become losers, this game will give you a lot more than you bargained for. There are so many different aspects to Fingers On Buzzers that no matter your speciality or age range, there's a round to help you shine.

The technical advances of Fingers On Buzzers compared to its DVD game predecessors means that the questions and rounds are selected randomly, allowing each game played to be different with an endless choice of variations so it will always test players' wits and will never become boring. In return for your skills and knowledge, Fingers On Buzzers rewards its players with high-end graphics, character identities and the hilarious voice of the quiz master.

It's all about winning in Fingers On Buzzers and the victor can have a winning dance in their virtual living room to celebrate their glory. However with such an enjoyable, fun and frenetic interactive DVD on offer, it'll only be moments before all the contestants want to start afresh with a brand new game of Fingers On Buzzers.

DVD
Adapted from the classic novel by Charles Dickens, The Personal History Of David Copperfield, released on DVD and Blu-ray 15th June 2020 from Lionsgate Home Entertainment, brings to life one of the ... END_OF_DOCUMENT_TOKEN_TO_BE_REPLACED
Hot PicksView