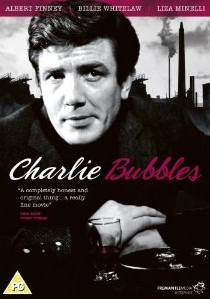 Written by Shelagh Delaney (Dance With A Stranger), the BAFTA Award winning writer of 'A Taste Of Honey', and starring and directed by Albert Finney, Charlie Bubbles co-stars Billie Whitelaw (Hot Fuzz; Quills), who won the BAFTA Award for Best Supporting Actress for her performance in the film, and Oscar winner Liza Minnelli (The Oh In Ohio; Stepping Out; Cabaret) in her debut movie role (her uncredited appearance as a baby in 1949's 'In The Good Old Summertime' notwithstanding).

Finney stars as the film's eponymous hero, a Northern, working-class lad made good, whose privileged life as a successful author living in London has left him bored and disillusioned. After spending a day on the booze in the West End with his best Smokey Pickles (Colin Blakely), Charlie takes to his Rolls Royce and, with his secretary Eliza (Minnelli) in tow, heads towards his native Manchester and neighbouring Derbyshire to pay a visit to his estranged wife (Whitelaw) and their young son, who he has promised to take to see Manchester United play against Chelsea. The visits to the haunts of his youth and to the football match prove to be as unfulfilling as his life in London, likewise a brief sexual encounter in a Manchester hotel with Eliza, and it's not long before Charlie accepts the futility of trying to re-establish himself with his past.

In many ways paralleling the writer/star's own Salford upbringing, his reputation for hard-living and his rapid rise to fame during the 1960s, Charlie Bubbles sees Albert Finney on shining form, both as a more-than-competent director and at his charismatic best as an actor in a film that brilliantly portrays the contrasts of Britain's socio-economic North-South divide during the 1960s.

Related Articles
The Green Man, The Poirot Collection, My Uncle Silas: The Complete Series, Before the Devil Knows You're Dead, A Good Year, Erin Brockovich, Big Fish
Hell Is A City, The Omen, The Krays: Limited Edition
Whoops Apocalypse
For your consideration HotBD
Two of Britain's most notorious brothers The Krays were taken on by another famous pair of siblings The Kemps in Peter Medak's big screen gangster biopic set for a Limited Edition Blu-ray release from Second Sight Films on 12th July 2021. END_OF_DOCUMENT_TOKEN_TO_BE_REPLACED
Comments
Hot Pick

HotDVDBDDIGITAL
With stunning revelations, glamorous journeys, and the arrival of the Jazz Age, Downton Abbey: A New Era, released on DVD and Blu-ray 15th August 2022 from Warner Home Video, will be the Crawleys' biggest adventure yet as they grapple with their future and new intrigue about ... END_OF_DOCUMENT_TOKEN_TO_BE_REPLACED
Top PicksView