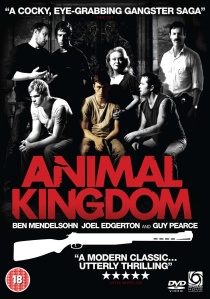 Directed by David Michôd and starring Ben Mendelsohn, Joel Edgerton, Guy Pearce, Luke Ford, Jacki Weaver, Sullivan Stapleton and introducing James Frecheville, Animal Kingdom, released on DVD and Blu-Ray by Optimum Home Entertainment on 11th July 2011, tells the gripping tale of seventeen year-old J (James Frecheville), as he fights for survival in a vicious criminal family and the detective (Guy Pearce, The King's Speech and Memento) who tries to save him. Pope Cody (Ben Mendelsohn), an armed robber on the run from a gang of renegade detectives, is in hiding, surrounded by roughneck friends and family. Soon, Pope's nephew, J, arrives and moves in, but when tensions between the family and corrupt cops reach breaking point, J finds himself at the centre of a cold-blooded revenge attack that turns the family upside down.

The film has received awards and nominations worldwide, including an Academy Award nomination for Best Supporting Actress for Jacki Weaver, and Grand Jury Prize at Sundance Film Festival.

DVD
Fast forward to the 1980s as Wonder Woman's next big screen adventure finds her facing a wide array of foes including Max Lord and The Cheetah as Wonder Woman 1984 flies in on Blu-ray and 4K UHD 22nd ... END_OF_DOCUMENT_TOKEN_TO_BE_REPLACED
Top PicksView