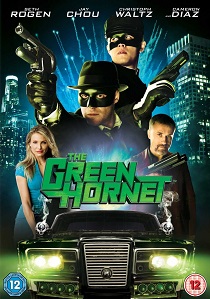 Justice has a new name, a kick-ass sidekick and no tights in the exciting new action comedy The Green Hornet, available on 3-disc Blu-ray 3D Combo Pack, Blu-ray and DVD on 3rd May 2011 from Sony Pictures Home Entertainment.

Packed with irreverent humor and "explosive action" (Elizabeth Weitzman, New York Daily News), The Green Hornet is the superhero hit moviegoers have been buzzing about all winter. Now, action fans can catch the excitement on Blu-ray 3D, Blu-ray and DVD, featuring eye-popping picture and sound, plus the latest in high-tech bonus features!

The Green Hornet will be available in a 3-disc Blu-ray 3D Combo Pack which will include the Blu-ray 3D, a 2D Blu-ray and a DVD of the film. Exclusively available on The Green Hornet 3D Blu-ray is the unique 3D Animated Storyboard Comparisons. The storyboard is a crucial stage in planning the shots of an intricate action scene. This feature presents the original storyboards for a scene in direct comparison (and contrast) to the final film. The storyboards have been brought to life with animated movement and rendered in 3D to take advantage of today's state-of-the-art home viewing systems

Britt Reid (Rogen) is the son of LA's most prominent and respected media magnate and perfectly happy to maintain a directionless existence on the party scene - until his father (Wilkinson) mysteriously dies, leaving Britt his vast media empire. Striking an unlikely friendship with one of his father's more industrious and inventive employees, Kato (Chou), they see their chance to do something meaningful for the first time in their lives: fight crime. But in order to do this, they decide to become criminals themselves - protecting the law by breaking it, Britt becomes the vigilante The Green Hornet as he and Kato hit the streets.

Using all his ingenuity and skill, Kato builds the ultimate in advanced retro weaponry, The Black Beauty, an indestructible car equal parts firepower and horsepower. Rolling in a mobile fortress on wheels and striking the bad guys with Kato's clever gadgets, The Green Hornet and Kato quickly start making a name for themselves, and with the help of Britt's new secretary, Lenore Case (Diaz), they begin hunting down the man who controls LA's gritty underworld: Benjamin Chudnofsky (Waltz). But Chudnofsky has plans of his own: to swat down The Green Hornet once and for all.