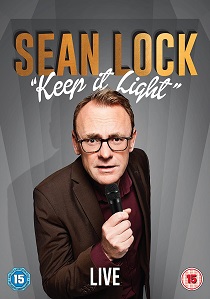 Every three years the comedian Sean Lock writes and tours a new stand-up show. Well he's only gone and done it again as Sean Lock: Keep It Light is released on DVD 20th November 2017 from Universal Pictures (UK). Recorded in April 2017 at the Theatre Royal in Margate, the show includes the comic's mischievous views on parenting, old age and immigration.

Sean Lock is one of the UK's most highly acclaimed and original comedians, making his stage debut over fifteen years ago. His stand-up is the product of a hyperactive imagination combining hilariously surreal imagery and insightful observations on the human condition.

Sean is a regular at London's Comedy Store and has appeared at all the major festivals around the world including Edinburgh, Melbourne, Montreal and the Stavanger Humorfestivat in Norway.

Sean has performed in some of the most successful live shows of recent years, beginning in 1995 when he collaborated with Bill Bailey on Rock, the much misunderstood music industry spoof later to be serialised on BBC Radio One.

Sean is team captain on the topical comedy panel show, 8 Out of 10 Cats, into its seventh series. Sean also has his own show on Channel 4, TV Heaven, Telly Hell, which returned for the second series in the summer of 2008 with guests including Jack Dee and Alan Carr.

Sean Lock has written and stars in his own BBC sitcom 15 Storeys High as Vince the lifeguard who lives in a South London tower block. The show quickly established itself as one of the most original comedy series of recent years and is a cult classic. Series 1 and 2 are now available on DVD. He also wrote and presented TV's Believe It Or Not for BBC4 in 2008 and The Great British Sunday where Sean looks at what Sundays always meant to him - from hangovers to Jack Hargreaves, from Sunday school and stately homes to utter boredom.

UHD
A 13-year-old girl named Meilin turns into a giant red panda whenever she gets too excited in Disney and Pixar's 25th feature film Turning Red, released on DVD, Blu-ray and 4K UHD 2nd May 2022 from Walt Disney Home ... END_OF_DOCUMENT_TOKEN_TO_BE_REPLACED
Top PicksView