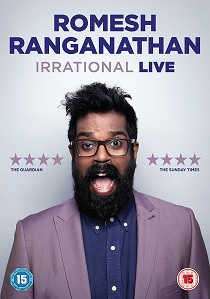 Romesh has sold over 100,000 tickets for his Irrational live show whilst touring the UK, and in 2016 played four sellout nights at London's Eventim Apollo, where he recorded the DVD and Digital download.

Due to a truly phenomenal demand and a 100% sellout of his Spring 2016 tour before it had even started, star of highly acclaimed Asian Provocateur (BBC3 & BBC1) and The Apprentice: You're Fired (BBC2) explores the rationality of his worldview, examining the issues close to his heart, and explaining why everybody else is wrong about them.

Nominated for the Edinburgh Comedy Award Best Newcomer in 2013, and then for the Edinburgh Comedy Main Award in 2014, as well as winning the Dave Leicester Comedy Award for Best Show 2015, Romesh Ranganathan is, without doubt, one of the UK's fastest rising comedy stars. His own BBC TV series Asian Provocateur, which initially saw Romesh return to his Tamil roots in Sri Lanka, received critical acclaim for its first series last year and the second series sees him and his Mum Shanthi going on a trip to America.

UHD
The grave course of events set in motion by Thanos that wiped out half the universe and fractured the Avengers ranks compels the remaining Avengers to take one final stand in Marvel Studios', Avengers ... END_OF_DOCUMENT_TOKEN_TO_BE_REPLACED
Hot PicksView