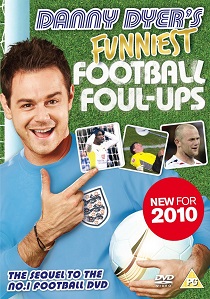 NewsComedy
News Article Go back to homepage
Danny Dyer's Funniest Football Foul-Ups is released by Revolver Entertainment on 22nd November 2010 and is the much anticipated sequel to his first Football Foul-Ups DVD which was last Christmas's number one selling sports title.
Danny Dyer
Steven Vinacour
Steve Kemsley
Revolver Entertainment
Unknown
22/11/2010
Thank you for supporting DVD365.net when you order using the link(s) below. As an Amazon Associate we earn from qualifying purchases
Buy DVD
Information

Professional footballers might not realize it but they're well capable of entertaining their fans in more ways than one as comedy sensation Danny Dyer explains. Everyone's favourite cheeky chappy is back with another hilarious football selection which is absolutely guaranteed to be top of every soccer nut's wish list this Christmas.

Presented by a very relaxed Danny propping up the bar at his local pub the DVD is crammed full of hilarious football foul-ups, outrageous skills and sensational action from many of today's star players and teams ... from the England squad downwards!

He shows how soccer really is a game of two halves as he takes you through the best, the worst and the wackiest moments of the game which all add-up to the ultimate must-have DVD for footie fans.

We see the stupidest of gaffes ... 'when you're a goalie and your manager tells you to stay on your line its worth finding out what line he's referring to' ... to the most sublime of goals ... 'not even BA's cabin crew could put together a better strike than this one from Lampard!' And on penalties taken inside the box - 'whoever made that wall should be named and shamed on watchdog'!

HotDVDBDDIGITAL
With stunning revelations, glamorous journeys, and the arrival of the Jazz Age, Downton Abbey: A New Era, released on DVD and Blu-ray 15th August 2022 from Warner Home Video, will be the Crawleys' biggest adventure yet as they grapple with their future and new intrigue about ... END_OF_DOCUMENT_TOKEN_TO_BE_REPLACED
Top PicksView