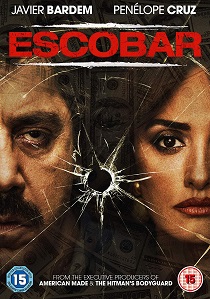 A feared and fearless criminal who amassed a fortune in excess of $20billion and is said to have been responsible for the deaths of more than 3,000 people, Escobar's reign of terror was infamous, and tore his beloved Columbia apart.

Twenty years in the making, Escobar offers a fresh and unique take on a criminal who was cruel and charismatic in equal measure. Exploring his infatuation with Vallejo, it journeys deeper into the legend of 'The King of Cocaine' than ever before, telling of his astonishing rise, and ultimately, his tragic fall.

BD
Now more stunning than ever before, return to the stunning locations and epic adventures in Peter Jackson's Middle-earth in The Lord of the Rings Trilogy, arriving on stunning 4K UHD 30th November ... END_OF_DOCUMENT_TOKEN_TO_BE_REPLACED
Hot PicksView

Fast forward to the 1980s as Wonder Woman's next big screen adventure finds her facing a wide array of foes including Max Lord and The Cheetah as Wonder Woman 1984 flies in on Blu-ray and 4K UHD 22nd March 2021 from Warner Home Video.
Movie quote