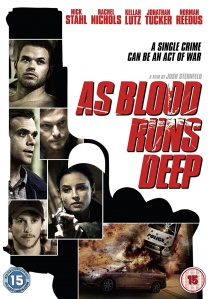 Starring Nick Stahl (Terminator 3: Rise of the Machines) and Kellen Lutz (Twilight), As Blood Runs Deep, released on DVD on 5th September 2011 by Metrodome, is a meticulously crafted murder mystery in which detective Noah Cordin (Nick Stahl) must return to his home town and confront the life he left behind...

Small-town detective Noah Cordin is called to solve a juvenile homicide that occurred during a home burglary in the affluent town of Hilliard. The dead boy's mother, Allison Connor, is a powerful woman in Hilliard; and rallies the township together in solidarity to support her and Detective Cordin's efforts to find the killers.

But things aren't always what they seem and some crimes find their criminals.

A gripping crime drama in the tradition of No Country for Old Men and Mystic River, As Blood Runs Deep is a poignant meditation on solidarity and salvation in modern-day America.