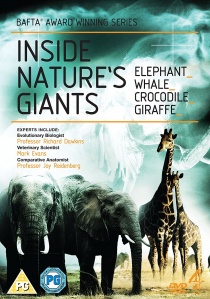 Delve under the skin of nature's most magnificent beasts when Inside Nature's Giants is released on DVD on 22nd August 2011 from 4DVD. Presented by eminent veterinary scientist Mark Evans, Inside Nature's Giants involves never-seen-before dissection and uncovers the anatomical secrets of the animal kingdom's most extraordinary species!

In this DVD, experts in comparative anatomy, evolution and behavior put some of the most popular and enigmatic large animals under the knife: an elephant, crocodile, whale and giraffe. While Evans interprets their finding, biologist Simon Watts tests the animals' physiology in the field and Professor Richard Dawkins traces back the animals' place on the tree of life to paint a fascinating picture of these incredible animals.

What makes this documentary stand out from other wildlife shows is that rather than demonstrating how animals behave, it uses dissection and wildlife photography to show how millions of years of evolution have enabled these species to thrive in their environments. Inside Nature's Giants answers the age-old questions: How did the elephant get its trunk? Why are giraffe's necks so long? And how did whales evolve from land mammals?

The new release uncovers some astonishing facts about these unique creatures including that the giraffe has the highest blood pressures of all animals, an elephant's trunk is the most versatile limb on the planet, crocodiles have the strongest bite in the animal kingdom (but it's teeth are hopeless for chewing!) and a whale's closest living relative is a hippo! Inside Nature's Giants is natural history as you've never seen it before - from the inside out!