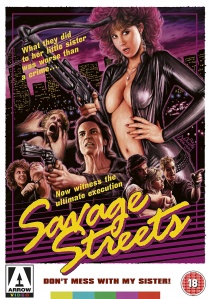 A film that gained much notoriety at the time of its original release for star Linda Blair's totally gratuitous nude scene and her blatant use of the 'c' word, the outrageous vigilante action flick Savage Streets is without a doubt one of 80s exploitation cinema's greatest guilty pleasures. Now, this undisputed classic is coming to DVD completely uncut for the first time in the UK and featuring a host of extra features including audio commentaries by the cast and crew, interviews with Linda Blair and Linnea Quigley, and much more.

During a night out cruising around Hollywood Boulevard, tough-talking high schooler Brenda (Blair) and her gang of sassy girlfriends, The Satins, cross paths with a bunch of local low life thugs calling themselves The Scars. When their advances on the girls are spurned in no uncertain terms and their prized convertible ends up dumped full of garbage, The Scars suffer a severe blow to their combined ego that demands a response.

Their barbaric retaliation takes the form of a violent sexual assault on Brenda's deaf-mute little sister, Heather (Quigley), that leaves the young girl fighting for her life. Determined to avenge her sister, Brenda tools up with an unlikely assortment of deadly weapons and takes to the streets in search of those responsible and for whom she is unwilling to show any mercy.